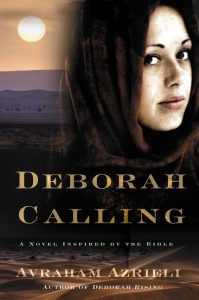 In the tradition of The Red Tent

, The Fifth Mountain, and The Mists of Avalon

comes this absorbing historical novel that reimagines the life of one of the Bible’s most revered women, the prophetess Deborah, and her epic journey to fulfill her destiny.
Deborah’s father dreamed that his daughter would one day become a prophet of the God of the Israelites. But the social and religious mores of her time dictated that a woman must marry–even against her will–and obey her husband. When Deborah is forced into an engagement with the violent son of her local judge, the young Hebrew woman rebels, determined to forge a new path.
Captivated by the notion of transforming herself into a man to escape the arranged marriage and fulfill her father’s dream, Deborah embarks upon an epic journey across the desert to find a mysterious elixirist rumored to be blessed with the gift of turning women into men. It is a journey that proves increasingly perilous–filled with wild beasts, lustful men, unscrupulous priests, and warring tribesmen. Yet Deborah discovers that she is not alone; an unlikely coterie of lepers, slaves, Moabite traders, and even a dead tiger come to her aid and defense along the way.
Part traditional biblical fiction, part adventure, Deborah Calling

is a captivating tale about the early life of one of the most famous figures from the Old Testament–a woman of courage and spirit whose battle to overcome discrimination, sexism, and paternalism speaks to women’s lives today.
Deborah Rising won the 2017 Illumination Book Awards for Fiction. Deborah Calling is the sequel.

The author of the bestselling Deborah Rising continues the fascinating story of the biblical prophetess Deborah in this entrancing work of visionary fiction—a tale of danger, mysticism, intrigue, and daring.

Deborah’s father dreamed that, one day, she would become a prophet—a seemingly impossible dream for a woman in a patriarchal society. To see this wish come true, Deborah made the cunning decision to become a man by seeking out a mysterious elixirist who could turn women into men.

Under the elixirist Kassite’s tutelage and training, Deborah learns the essential traits of masculinity and steadily grows stronger, building muscle and willpower. But Kassite requests something in return: he needs Deborah’s help to escape enslavement and return to his homeland. It is the beginning of another thrilling adventure through the desert—a cat-and-mouse chase between Deborah and her violent fiancé who still hunts her, a chance meeting with an ancient healer who has a prophetic message, and a revelatory spiritual experience in an abandoned cave.

As she continues on the path God has laid before her, Deborah witnesses the darkness that can take hold in the hearts and souls of men—evil that causes her to reflect on the wisdom, insight, and inspiration she has gained from the women in her life. Will becoming a man truly help her become a prophetess, or might there be another path? Visionary dreams, a mysterious eagle, and an extraordinary band of ex-slaves will help Deborah find the answer . . . and ultimately her calling.

imagines the life of one of the most famous figures from the Old Testament as she continues on her path to becoming a prophetess.

Learn more or download a copy at these retailers:

Avraham Azrieli is the author of nine fiction and nonfiction works. He is a

member of the Mystery Writers of America, the International Thrillers Writers Association, the Historical Writers of America, the Historical Novel Society, the Authors Guild, and other professional societies, and his work has been reviewed by numerous outlets, including Examiner, US Review of Books, New York Daily News, The Jewish Journal, San Francisco Book Review, and more. He lives in Maryland. Visit him online at azrielibooks.com.

1 thought on “Deborah Rising and Deborah Calling by Avraham Azrieli”